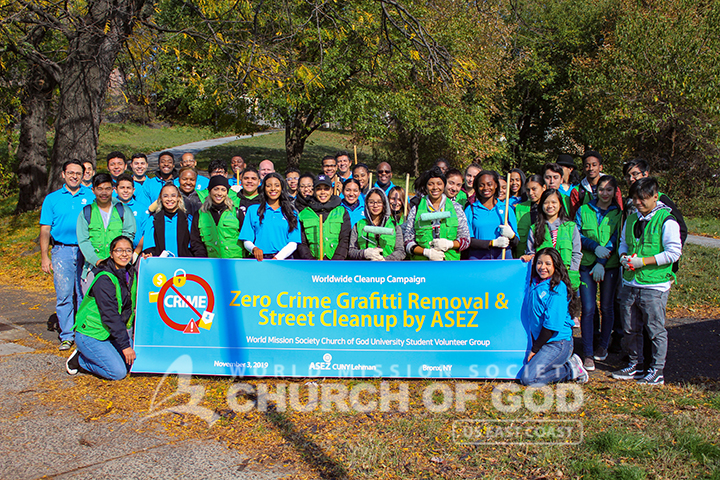 On November 3, ASEZ volunteers from the Bronx, NY partnered with New York State Assemblywoman Latoya Joyner to change the face of one Bronx neighborhood through a graffiti removal project and an environmental cleanup. Despite getting a preview of a cold November, volunteers came determined to make a positive impact on their neighborhood.

ASEZ students from Lehman College and Bronx Community College came together to help rid their neighborhood of graffiti and litter. Sedgewick Avenue is located about a mile from the iconic Yankees’ Stadium and is home to Bronx residents who have expressed concerns about the appearance of their community. As a result, over 70 ASEZ volunteers grabbed rollers, paintbrushes, and trash bags, ready to get to work.

The volunteers gathered over 50 bags of trash and covered a 400 square foot section with a fresh and clean coat of paint, reinvigorating the entire atmosphere of the street. The Assemblywoman said she was greatly moved that students would be willing to take on such a tremendous task.

“Thank you so much, you guys are very inspiring. I see the network of people that truly care. Today, many people just picked up, wherever they could fit in, they were able to do so. And there wasn’t a lot of pulling or tugging-of-war, it was just people that truly care that just jumped right in into helping, so I just want to say thank you,” said Assemblywoman Joyner.

“We are from the Bronx. If we make the environment like this, we should clean it up,” said Jasmin Vargas, a student at Bronx Community College. Kevin Tierney, who attends the Collegiate Institute for Math and Science said, “It’s important to show we’re demonstrating an interest in the benefit for the community.”

ASEZ volunteers were happy to respond to their neighbors’ concerns by helping to remove and eliminate trash, graffiti and other visible signs of crime in the area. As university students are future leaders, ASEZ hopes to continue to make an impact on its community. Through small acts of kindness, ASEZ students not only in the state of New York but around the world, hope to continue to make a positive impact on campuses and communities across the globe.

To learn more about ASEZ and its recent events in New York, visit our Activities page!