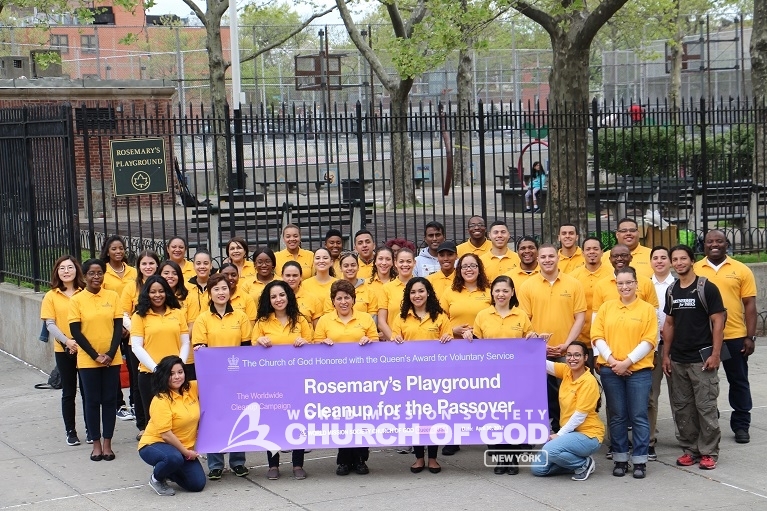 Rosemary’s Playground is known as a neighborhood gem in the Ridgewood area of Queens. On Sunday April 30, 2017, more than 45 volunteers of the World Mission Society Church of God joined the Partnership for Parks and community members to beautify Rosemary’s Playground through multiple projects, including painting the playground fence, raking leaves, and collecting debris and trash. The playground has not seen renovations in more than 20 years. The volunteers collected 500 pounds of trash and painted 240 feet of fence.

Local residents visited the playground that day with inquisitive looks and pleasant murmurs. Many onlookers were curious about what was happening to their favorite playground while others graciously thanked the volunteers for their great efforts to improve the playground.

“This is a project that has been in the works for years and I am very happy that it was able to be accomplished today with the great efforts from the volunteers of the Church of God,” said the Queens Volunteer Assistant for the Partnership for the Parks program, which works directly with the NYC Parks Department. This project marked a great start to many more initiatives that will take place in the Ridgewood area with the Church of God.

“Today is just one of many cleanup projects that we will do for our community here in Ridgewood, Queens” said Jasmine, a Church of God volunteer. “We hope to make a great impact in the community and invite others, too, to do the same.”

After a few hours of sweat, hard work, and genuine efforts Rosemary’s Playground was revamped from the newly painted fence to the cleaned areas. The beautification project was part of the Church of God’s national and international environmental protection efforts. As of April 2017, the Church of God has carried out more than 3,560 worldwide cleanups to date.