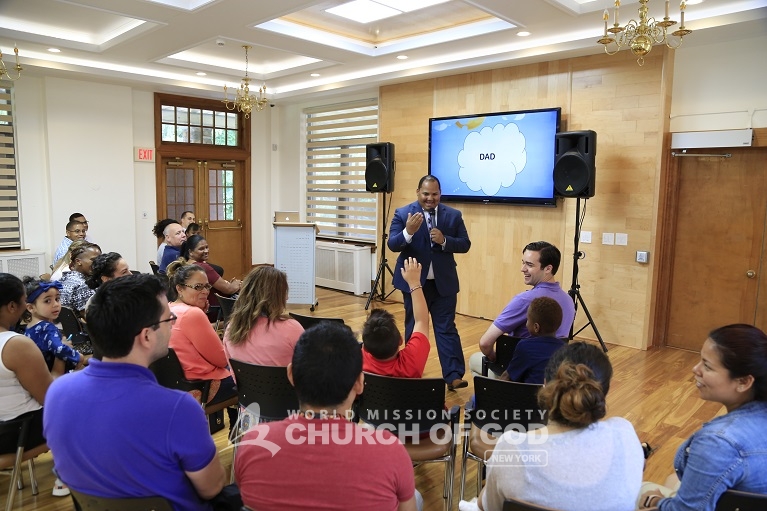 The World Mission Society Church of God in New Windsor held a special event for Father’s Day 2017. Whether members of the Church or from the community, fathers received much deserved honor.

The Church of God hosted the event to commemorate dads for the hard work they do for their families. Various tables sprawled across the room with a seminar area sectioned off at the end of the room. Nevertheless, a burger bar stole the attention in the middle with a ‘Happy Father’s Day’ banner hung directly above.

To ease the dads into having fun and letting loose, the host kicked things off with a Q&A putting the fathers in the spotlight. “What’s the funniest memory you have with your dad?” or “What makes your dad special?” were some of the questions the crowd didn’t shy away from answering. Next, the host went on to explain a little more about the church to newcomers.

However, emotion filled the room while the host explained the origin of our fathers’ love. “Sometimes a father’s work goes unnoticed, but through the Bible we see that the devotion and sacrifice that comes through a father is the reflection of our heavenly Father,” said the host. Through the example of God the Father, the audience felt the efforts of their own fathers, albeit we do not always speak about them.

“I was so happy for my dad to feel the love I continually felt at the Church of God,” stated Church member Maxine Paktor. “My father is such an important figure in my life. I was happy to have him share in the things that bring me joy as well.”

As a result of the event, fathers and their children were able to share an incredibe time together. It was a day the dads will surely not forget about until the next Father’s Day.